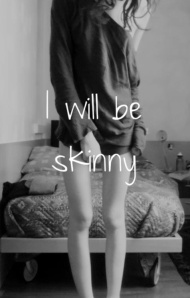 I have a confession to make, I used to be thin. Really thin, model thin or thinner!!! If you know me now, you might say “you are still thin”. But I don’t think you would be grasping what I’m saying here.

Yesterday I watched a HBO documentary, that I had seen previously, about 6-years ago. The title of the documentary “Thin”. What prompted me to watch it? An Elton John concert the night before. Sounds weird right? Well, maybe not so weird if you understood the context.

I was sitting in front of a couple of adorable girls in their 20’s wearing cute midriff shirts, their tummy so tight and narrow, made me feel like I don’t want to put another piece of food in my mouth, I want to have a narrow tummy like I did some 12 years ago. It made this 107 lb girl feel like quite a fatty.

Yesterday I ended up having fresh squeezed lemon in my water, a salad for lunch instead of my boyfriend’s suggested pizza delivery and some soup for dinner. Today, 1 cup brown rice, a green juice and a pear dish. You think it’s strange that I’m reporting what I ate to you for the past two days? Really not so strange if you suffer from Anorexia.

I had thought I got over this but after seeing those girls at the concert and reminding myself that my high school reunion is next summer made me feel like I really need to lose about 10 lbs so I can be thin again. You see I was very thin, I weighed 85 lbs at the age of 33. Someone had asked me at my brother’s wedding if I was pregnant, and looking back at my photos from that time, I can certainly see why! I weighed the most ever, 118.  It was easy to cut back on what I was eating, but I did it in an unhealthy way. With the addition of coffee, exlax and cigarettes I was able to lose a lot of weight, and I got a lot of complements! Made me feel really great about myself. I would check my body all day long, I would step on the scale before work, when I got home from work and then anytime I ate something I stepped on the scale to see if I gained any weight. Things I would eat would be like a couple of slices of cucumber, maybe a saltines cracker, ramen noodles or a bean burritos from Taco Bell.  I also drank a lot of diet cokes. This was my diet. I would push around my food so people thought I ate, and sometimes if someone had an event which included food I would try to either avoid it or “join for dessert”.

Why am I telling you all this? I don’t want to fall back into my old habits, I need support. Much of what the documentary covered were things I did. I can say I never binge, I never purged, I simply didn’t eat. You can check out “Thin” yourself on Amazon Prime.

A couple interesting observations of the documentary. It looked as though many of the girls profiled had very bad skin, probably from a bad diet. The second item I noticed is their hair was not healthy looking. I really don’t want to fall back into my bad habits because I do want healthy skin and hair. I want to look healthy, but I also want to be thinner. I’m hoping I can figure this out.

If you know someone displaying habits that appear to stem from an eating disorder, please refer to the following resources:
http://www.discoveryeatingdisordertreatment.com/teen_eating_disorders12.html

My name is Lisa and I am a Certified Health Coach. I received my training from the Institute for Integrative Nutrition. As a Colorado native, I have always been interested in health and fitness. If you have any recipes to share, or feedback regarding this blog, please let me know, I am looking forward to your thoughts.

Disclaimer: The information and coaching we provide is intended to educate, inform, amuse, and inspire you on your personal journey towards optimal health and a thriving life. It is clearly not intended to replace a one-on-one relationship with a qualified health care professional and is definitely not intended as medical advice, diagnosis, or treatment. If you are under the care of any health professionals (or should be), we strongly encourage you to discuss modifications in your diet, lifestyle, exercise program, nutrition, or use of Energy Tapping with them prior to making any changes, and never discontinue or reduce prescription medications without consulting your doctor or pharmacist.

Encouraging those who want support to reach their health goals.

Health Coaching for a Healthier You

Food, farms, recipes and resources from a tiny Brooklyn kitchen

Food for the mind, body, and soul